musings from Sydney on quality and testing

This is an excerpt from Chapter Three of ‘Changing Times: Quality for Humans in a Digital Age‘

“It seemed as though setting up a Direct Debit should be a relatively simple process but the website was apparently created with a secondary purpose as a kind of psychological test. Kim remembered a lecturer at university who had showed them something called the ‘Five Room Puzzle’; a challenge where you were shown a plan of a house with five rooms and asked to draw a single continuous line which crossed each of the walls just once.

It was an ingenious, devious device, intended to frustrate, and ultimately to force the students to accept that there was no legitimate solution. For a group of smart people who liked to solve problems, this was not easy. It was, however, perfect preparation for the experience of using OzTelia’s website.

Much like the puzzle, it had looked deceptively easy at first. The section of the website for Direct Debits gave a choice of options: Setup, Amend, or Cancel. Selecting the first of these led to a login page with some instructions about what to do once she had logged in. Of course, once she had logged in, the instructions disappeared, which made things a little complicated. 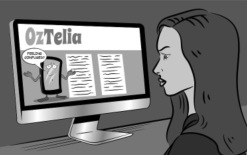 Kim opened another tab in the browser and found the instructions again. Unfortunately, the words and pictures which described the account page and the steps to follow were very different to what she saw on her own screen. There was no sign of a link to create a Direct Debit anywhere but there was a little picture of the company’s mascot; a kind of cartoon mobile phone called Ozzie, which she remembered from their TV ads. Ozzie had a little speech bubble saying: ‘Need help?’. She most certainly did.

When she clicked on the picture of Ozzie, a ‘Support’ page appeared, containing a long list of possible topics to read. There was no time to read through them all but the page also had a place to search for a term so she typed ‘Direct Debit’ and hit the button. A picture appeared of Ozzie riding a bike, with an animated spinning circle around him and the words ‘Working on it…’ underneath.

After a few seconds, a familiar sight. The search had taken her back to the page with options to Setup, Amend or Cancel; the same place where the process had started. This was no help at all. Surely it was possible to talk to someone instead.

After a bit of digging around, Kim found a page called ‘Getting in touch with us’. It looked like there were different paths to follow, depending on what you wanted to talk to them about. One of the options was Billing, and this led to another list of choices. About halfway down that list she spotted ‘Setting up your Direct Debit’. She selected it.

After a short interlude during which Ozzie once more appeared on his bike, the screen showed those same three options: Setup, Amend, and Cancel. It didn’t seem to matter what she did. It was her destiny to return to this page.
Suddenly, a box popped up on the screen:

>> Hi, this is Jim. Can I help you with anything today?

She’d seen this sort of thing before; a kind of chat support where they tried to help you without actually talking to you. Ian had told her that they were not real people she was chatting with but some kind of automated response system. It was worth a try:

>> Hi Jim. I’m trying to set up a Direct Debit but I can’t work out how to do it

A short delay, then:

>> I can help you with this. Who am I chatting with?
>> My name is Kim
>> Hi Kim. And you need help with a Direct Debit?
>> Yes
>> OK. There are three options for Direct Debits. You can Setup, Amend or Cancel. Which of these would you like to do?
>> Setup
>> Great. Can you please tell me what sort of service you have with us. Mobile, home phone or broadband.
>> Home phone and broadband
>> Is this an ADSL or Cable connection?
>> I’m not sure… Cable I think
>> Unfortunately there is no facility for setting up Direct Debit online for Cable customers. Please call us and we can set this up for you over the phone.

Kim closed the chat window in frustration. What a waste of time. Why send out an email telling her to set up Direct Debit online if she couldn’t do it, and why didn’t the website tell her which customers could or couldn’t do it? Now she would have to try to find a phone number to call them and would probably have to sit on hold for twenty minutes. Maybe another day.

She felt a little guilty about shutting down the chat with Jim mid-conversation, but if Ian had been right and Jim really was just a robot then she probably hadn’t hurt his feelings too much.

If you use technology, there is a good chance that at some time or another you will have had a similar experience to Kim. Carrying out a seemingly simple task – in this case, setting up a direct debit for a phone bill – is thwarted by a website which has been designed and built in such a way that the task becomes prohibitively difficult.

The frustration Kim feels is largely down to the content of the site, and the poorly defined links which repeatedly send her back to the same page. But when she finds herself in difficulty, she also feels unsupported. The site’s support pages are no help whatsoever and the chat system, whilst finally providing some kind of explanation, does little to improve Kim’s mood (or her impression of the website and the company). She notices some of the visual elements which have been included, perhaps in an attempt to enliven what might be rather mundane activities, but animated pictures of cartoon mobile phones do not compensate for being unable to do the thing you set out to do.

During her efforts, Kim is reminded of an unsolvable puzzle and sometimes it can indeed feel as though these sorts of difficulties are the result of some cruel trick; a deliberate attempt to frustrate us through the use of deception and misinformation. It would be an unusual (and probably unemployed) designer who set out to create such a troubling product. Poor experiences are less likely to be by design than the result of errors, bad decisions, poor management, or a combination of these.

Perhaps Kim has little option but to continue using OzTelia’s products and services, regardless of how ineffective they are. It might be that they operate in a market with few competitors and have little incentive to change or to think about how people will feel when they use their products. Kim’s experience suggests that, in the design of their website at least, the company has not shown the care and consideration their customers would hope for.

In this section, we will explore how empathy – the ability to see things from another person’s perspective – can help people involved in product development to consider the people who use those products, and help companies like OzTelia create better experiences for their customers. We will look at some of the techniques used in software development which have contributed to an empathy gap, and some methods which have been adopted in an attempt to close that gap.”

Excerpt From: “Changing Times: Quality for Humans in a Digital Age” published by Heddon Publishing.
This material may be protected by copyright.

One thought on “An excerpt from ‘Changing Times’”